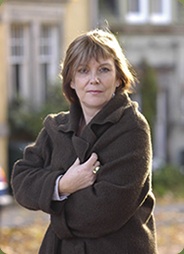 Kate Atkinson was born in York in 1951 and studied English Literature at Dundee University. After graduating in 1974, she researched a postgraduate doctorate on American Literature. She later taught at Dundee and began writing short stories in 1981. She began writing for women’s magazines after winning the 1986 Woman’s Own Short Story Competition. She was runner-up for the Bridport Short Story Prize in 1990 and won an Ian St James Award in 1993 for her short-story “Karmic Mothers”, which she later adapted for BBC2 television as part of its ‘Tartan Shorts’ series.

Her first novel, Behind the Scenes at the Museum (1995), won the 1995 Whitbread Book of the Year award, beating Salman Rushdie‘s The Moor’s Last Sigh and Roy Jenkins’ biography Gladstone. The book is set in Yorkshire, narrated by Ruby Lennox, who takes the reader through the complex history of her family, covering the events of the twentieth century and reaching back into the past to uncover the lives of distant ancestors. The book has been adapted for radio and theatre and has been adapted for television by the author. Her second novel, Human Croquet, was published in 1997 and relates the story of another family, the Fairfaxes, through flashback and historical narrative.

She has written two plays for the Traverse Theatre in Edinburgh: a short play, Nice (1996), and Abandonment, which premiered as part of the Edinburgh Festival in August 2000. She currently lives in Edinburgh and is an occasional contributor to newspapers and magazines. Her third novel, Emotionally Weird, was published in 2000. In 2002 her collection of short stories, Not the End of the World (2002), was published. Her latest books are Case Histories (2004), One Good Turn (2006), the latter shortlisted for the British Book Awards Crime Thriller of the Year, and When Will There Be Good News? (2008).