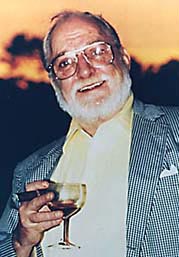 W.E.B. Griffin is the author of thirty-six epic novels in six series, all of which have been listed on The New York Times, The Wall Street Journal, Publishers Weekly and other best-seller lists. More than forty million of his books are in print in more than ten languages, including Hebrew, Chinese, Japanese, and Hungarian.

Mr. Griffin grew up in the suburbs of New York City and Philadelphia. He enlisted in the United States Army in 1946. After basic training, he received counterintelligence training at Fort Holabird, Maryland. He was assigned to the Army of Occupation in Germany, and ultimately to the staff of then-Major General I.D. White, commander of the U.S. Constabulary.

Mr. Griffin is a member of the Special Operations Association, the Veterans of Foreign Wars, the American Legion, the Army Aviation Association, and the Armor Association.

He was the 1991 recipient of the Brigadier General Robert L. Dening Memorial Distinguished Service Award of the U.S. Marine Corps Combat Correspondents Association, and the August 1999 recipient of the Veterans of Foreign Wars News Media Award, presented at the 100th National Convention in Kansas City.

And he is the co-founder, with historian Colonel Carlo D’Este, of the William E. Colby Seminar on Intelligence, Military, and Diplomatic Affairs. (www.norwich.edu/symposium and www.pritzkermilitarylibrary.org/colby) Mr. Griffin’s novels, known for their historical accuracy, have been praised by The Philadelphia Inquirer for their “fierce, stop-for-nothing scenes.” “Nothing honors me more than a serviceman, veteran, or cop telling me he enjoys reading my books,” Mr. Griffin says. Mr. Griffin divides his time between the Gulf Coast and Buenos Aires.

Signed books by W.E.B. Griffin are available at www.vjbooks.com