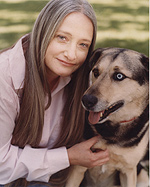 Jan was born in Texas, but has lived in Southern California most of her life, often in coastal cities several of which combine to make up the fictional Las Piernas, where Irene Kelly works and lives. She comes from a close-knit family, and remains close to not only her parents, her two sisters (neither of whom resemble Irene’s sister, Barbara) and brother, but also a wonderful assortment of nephews, nieces, cousins, aunts, and uncles. She and her husband, Tim, share their home with two dogs, Cappy and Britches. Jan’s husband is musician Tim Burke, whose bands include Bushtaxi.

She attended California State University, Long Beach, and graduated with a degree in history.

She served as the original editor of Sisters in Crime’s guide to getting published, Breaking And Entering. She is a past president of the Southern California Chapter of Mystery Writers of America and has served on MWA’s National Board.