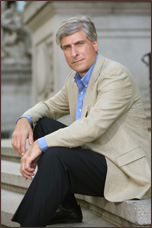 The Charlie Smith in St. Marys author Steve Berry‘s new book, The Charlemagne Pursuit, is a brutal assassin who says he’s killed more people than he can remember.

Berry offered to use Smith’s name in his new book, set for release Tuesday, after Smith did him a favor while on vacation overseas several years ago. But Smith, who hasn’t read an advance copy of the new book, said he didn’t know he would be a namesake for a hit man.

“I hope it doesn’t ruin what little reputation I have left around here,” Smith said, laughing. “It’s fun to have your name used in a best-selling novel. I’m looking forward to the reaction.”

All six of Berry’s novels have made the New York Times Bestseller List. The Alexandria Link reached No. 2 two years ago.

Berry has been using the names of prominent and little-known people in Camden County since his first book, The Amber Room, was published in 2003.

“I wanted the characters’ names to have meaning,” he said.

In Smith’s case, Berry said, he didn’t plan to make him a villain because the villains in his books are usually fictitious names. But Smith made a special request.

Berry accommodated him, but he makes it clear in the book that Charlie Smith is an alias used by the assassin, who is never identified by his real name.

Ed McCoy of St. Marys said the book brings bittersweet memories of his wife, Diane, whose name is used for an assistant national security adviser in the new book.

McCoy said his wife of 29 years didn’t know he made the winning bid at a charity auction to have Berry use her name in an upcoming book.

It was intended to be a surprise, but McCoy told his wife shortly before her death from cancer in April.

She was 64 when she died after battling the disease for five years.

McCoy was given an advance copy of the book and said seeing his wife’s name in print is an emotional experience.

“I was real happy,” he said. “People will see her name and remember her a lot. When you’re in a book, you’re in it forever.”

One surprise, he said, is that Smith’s character tries to kill his wife in the book. Smith is a family friend, McCoy said.

“I couldn’t believe he’d be an assassin,” McCoy said.

“I was overwhelmed when Steve asked me to do it,” Daniels said.

While he often uses names of people he knows, Berry said the only person whose personality resembles a character in one of his books is Daniels.

Daniels’ name also has caused some good-natured joking locally, and at least one debate.

He is often called Mr. President when he goes to a local convenience store. In a golf tournament on St. Simons Island recently, he was paired with a man who was reading a Berry book.

When Daniels introduced himself, the man told Daniels he was reading a book with a character with the same name. When Daniels told the man he was the namesake, it took a long time to convince him, he said.

Although Daniels said he enjoys the occasional joking about his name being published in millions of novels, he also realizes the fame doesn’t go past the county line.

Smith said he’s hoping Berry will give up his law practice one day to focus on writing full time.

“I want him to be a great success so I will not have to compete with him in the legal practice,” he said.

With 8 million books in print in 43 languages, Berry said Smith is getting his wish.

Most of his clients agreed with the decision to give up writing legal briefs for novels, he said.

“They were very understanding,” he said. “A lot of them said it was about time. Most have been very supportive.”

Now, Berry said, he will focus on writing full time, but he plans to keep his law license. His 2009 book, Paris Club, is being edited, he said.

Get your signed Steve Berry books at www.vjbooks.com