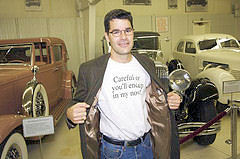 This isn’t to say all I’ve ever done is work and write. Credibility is one of the keys to success as an author. Readers have to believe you know what you’re talking about or they won’t care about the book. There are two ways to gain credibility. One is to do massive amounts of research and the other is to actually do the stuff you write about. So I’ve taken flying lessons and leaned how to sky dive and scuba. I’m a pretty fair shot with a pistol but much better with a rifle.

I’ve traveled to more than two dozen countries, many of which aren’t recommended for your casual tourist. There was a government warning in place when I was in Peru about avoiding unnecessary travel there, and a couple of days after I left the Shining Path guerrilla organization bombed the town where I was staying. I was on one of the last flights out of eastern Greenland before winter closed the airports. That was early September if I recall. I arrived in Eritrea a week after six Belgian aid workers were gunned down in the region I had planned to explore. Went though Checkpoint Charlie a couple of months before it came down and was in Israel when an airliner was hijacked by radical Palestinians and the country went on lock down.”

Writing in a similar manner to writer Clive Cussler, his own novels focus on his character, Dr. Philip Mercer, a successful mining engineer and geologist who gets involved in various threats to the world.

Recently, he has been co-authoring “The Oregon Files” novels with Clive Cussler, taking over from Craig Dirgo with the third novel. He has thus far collaborated on the New York Times bestsellers Dark Watch, Skeleton Coast, and Plague Ship.