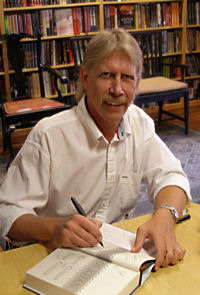 Since moving to Phoenix, Arizona in 1987, Roland Dahlquist has enjoyed a successful and award winning career as a freelance Illustrator & Art Director.

Roland established Dahlquist Illustration in 1987.  Since then he has freelanced for graphic design firms, advertising agencies, publishers, organizations and directly with corporations locally as well as in other regions of North America.

Having a degree in Fine Art, Roland now concentrates on creating his own images whether painting in oil, pastels, pencil or generating them on his computer.

Dahlquist continues to study painting at Scottsdale Artists’ School and has also studied in Europe.  Painting is one of the motivating factors in Dahlquist’s travels through The U.S. and Europe.

In 2003 Roland joined the faculty at The Art Institute of Phoenix to teach Drawing, Design, and Illustration.