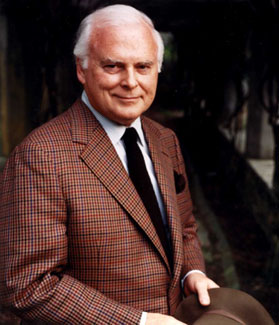 Stuart Woods was born in the small southern town of Manchester, Georgia and attended the local public schools, then graduated from the University of Georgia, with a BA in sociology.
In the Fall of 1979 he had contracted to publish a novel, on the basis of two hundred pages and an outline, for an advance of $7500. “I was out of excuses to not finish it, and I had taken their money, so I finally had to get to work.” He finished the novel and it was published in March of 1981, eight years after he had begun it. The novel was Chiefs.

Though only 20,000 copies were printed in hardback, the book achieved a large paperback sale and was made into a six-hour television drama for CBS-TV, starring Charlton Heston at the head of an all-star cast that included Danny Glover, Billy Dee Williams and John Goodman. The 25th Anniversary of Chiefs came in March, 2006, and W.W. Norton publish a special commemorative replica edition of the hardcover first edition, which can be ordered from any bookstore. Chiefs established Woods as a novelist. The book won the Edgar Allan Poe prize from the Mystery Writers of America, and he was later nominated again for Palindrome.

More recently he was awarded France’s Prix de Literature Policiere, for Imperfect Strangers. He has since been prolific, writing thirty-seven novels. His thirty-fifth novel, Shoot Him if he Runs, a new Stone Barrington, was published on September 25, 2007.

His publisher has asked him to write three books a year, instead of two, so Beverly Hills Dead, (a sequel to The Prince of Beverly Hills), was published in January of 2008, followed by Santa Fe Dead (an Ed Eagle novel), in April, and a new Stone Barrington novel in the autumn of that year.

He is a born-again bachelor who shares his life with a Labrador Retriever named Fred (like all his dogs) and lives in Key West, Florida, on Mount Desert Island, in Maine, and in New York City.