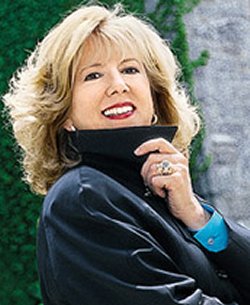 Linda Fairstein is the internationally best-selling author of a series of crime novels featuring Manhattan prosecutor Alexandra Cooper. The novels draw on Fairstein’s legal expertise as well as her knowledge of and affection for the rich history of the city of New York.

Fairstein (born 1947) is one of America’s foremost legal experts on crimes of violence against women and children. She served as head of the sex crimes unit of the Manhattan District Attorney’s office from 1976 until 2002 and is the author of a series of novels featuring Manhattan prosecutor Alexandra Cooper.

Ms. Fairstein is an honors graduate of Vassar College (1969) and the University of Virginia School of Law (1972). She joined the Manhattan District Attorney’s office in 1972 as an Assistant District Attorney. She was promoted to the head of the sex crimes unit in 1976.

During her tenure, she prosecuted several highly publicized cases, including the “Preppy Murder” case against Robert Chambers in 1986. Ms. Fairstein’s office supervised the prosecution of the Central Park Jogger case in 1989, which ended in the conviction of five teenagers. Their convictions were vacated, and this ruling was upheld by the New York Supreme Court on appeal.

Linda Fairstein left the District Attorney’s office in 2002, and has continued to consult, write, lecture and serve as a sex crimes expert for a wide variety of print and television media outlets, including CNN, MSNBC, and Larry King, among others. Ms. Fairstein is often called to provide her opinion on high profile prosecutions including: Michael Jackson’s molestation charges in 2004, Kobe Bryant’s sexual assault charges, and Scott Peterson’s trial. She is also a frequent speaker on issues surrounding domestic abuse.