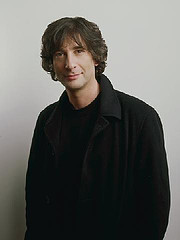 Neil Gaiman has won the 2009 Newbery Medal for The Graveyard Book (HarperCollins). Beth Krommes has won the 2009 Randolph Caldecott Medal for The House in the Night (Houghton Mifflin), written by Susan Marie Swanson. The awards were announced this morning at the American Library Association’s midwinter conference in Denver.

There were three Caldecott Honor Books: A Couple of Boys Have the Best Week Ever by Marla Frazee (Harcourt); How I Learned Geography by Uri Shulevitz (FSG); and A River of Words: The Story of William Carlos Williams, illustrated by Melissa Sweet, written by Jen Bryant (Eerdmans).

Jellicoe Road by Melina Marchetta (HarperTeen) won the Michael L. Printz Award for excellence in literature for young adults. Four Printz Honors were given: The Astonishing Life of Octavian Nothing, Traitor to the Nation, Volume II: The Kingdom on the Waves by M.T. Anderson (Candlewick); The Disreputable History of Frankie Landau-Banks by E. Lockhart (Hyperion); Nation by Terry Pratchett (HarperCollins); and Tender Morsels by Margo Lanagan (Knopf).

The Robert F. Sibert Award for the most distinguished informational book went to Kadir Nelson’s We Are the Ship: The Story of Negro League Baseball (Hyperion/Jump at the Sun). There were two Sibert Honors: What to Do About Alice? by Barbara Kerley, illustrated by Edwin Fotheringham (Scholastic Press) and Bodies from the Ice: Melting Glaciers and the Recovery of the Past by James M. Deem (Houghton Mifflin).

Kadir Nelson won the Coretta Scott King Author award for We Are the Ship: The Story of Negro League Baseball (Hyperion/Jump at the Sun), and Floyd Cooper won the Coretta Scott King Illustrator Award for The Blacker the Berry, written by Joyce Carol Thomas (HarperCollins/Amistad). The John Steptoe Award for New Talent went to Shadra Strickland, illustrator of Bird, written by Zetta Elliott (Lee & Low).

Three King Illustrator Honors were also selected: Kadir Nelson for We Are the Ship: The Story of Negro League Baseball (Hyperion/Jump at the Sun); Before John Was a Jazz Giant, illustrated by Sean Qualls, written by Carol Boston Weatherford (Henry Holt); and The Moon Over Star, illustrated by Jerry Pinkney, written by Dianna Hutts Aston (Dial).

The William C. Morris Award for YA Debut, honoring a debut book published by a first-time author writing for teens, went to A Curse Dark as Gold by Elizabeth C. Bunce (Scholastic/Levine).

The Odyssey Award for Excellence in Audiobook Production went to The Absolutely True Diary of a Part-Time Indian, written and narrated by Sherman Alexie (Recorded Books).

The Margaret A. Edwards Award for lifetime contribution in writing for young adults was given to Laurie Halse Anderson, and Kathleen T. Horning, director of the Cooperative Children’s Book Center at University of Wisconsin-Madison, was chosen to deliver the May Hill Arbuthnot Honor Lecture.