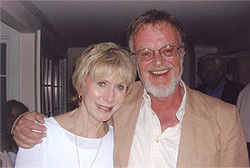 Bernard Cornwell was born in London in 1944 – a ‘warbaby’ – whose father was a Canadian airman and mother in Britain’s Women’s Auxiliary Air Force. He was adopted by a family in Essex who belonged to a religious sect called the Peculiar People (and they were), but escaped to London University and, after a stint as a teacher, he joined BBC Television where he worked for the next 10 years. He began as a researcher on the Nationwide programme and ended as Head of Current Affairs Television for the BBC in Northern Ireland.

It was while working in Belfast that he met Judy, a visiting American, and fell in love. Judy was unable to move to Britain for family reasons so Bernard went to the States where he was refused a Green Card. He decided to earn a living by writing, a job that did not need a permit from the US government – and for some years he had been wanting to write the adventures of a British soldier in the Napoleonic wars – and so the Sharpe series was born. Bernard and Judy married in 1980, are still married, still live in the States and he is still writing Sharpe.