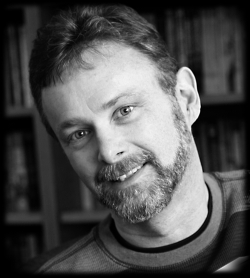 Christopher Moore was born in Toledo, Ohio and grew up in Mansfield, Ohio. His father was a highway patrolman and his mother sold major appliances at a department store. He attended Ohio State University and Brooks Institute of Photography in Santa Barbara. He moved to California when he was 19 years old and lived on the Central Coast until 2003, when he moved to Hawaii.

Before publishing his first novel, Practical Demonkeeping in 1992, he worked as a roofer, a grocery clerk, a hotel night auditor, and insurance broker, a waiter, a photographer, and a rock and roll DJ. Chris has drawn on all of these work experiences to create the characters in his books. When he’s not writing, Chris enjoys ocean kayaking, scuba diving, photography, and sumi-e ink painting. He divides his time between Hawaii and San Francisco.

Moore’s novels typically involve conflicted everyman characters suddenly struggling through supernatural or extraordinary circumstances. Inheriting a humanism from his love of John Steinbeck and a sense of the absurd from Kurt Vonnegut, Moore is a best-selling author with major cult status.

According to his interview in the June 2007 issue of Writer’s Digest, the film rights to Moore’s first novel, Practical Demonkeeping, were purchased by Disney even before the book had a publisher. Nevertheless, the cinematic manifestation of Moore’s novels is yet to be fulfilled: during his book-tour for You Suck (early 2007), in answer to repeated questions from fans over the years, Moore stated that all of his books have been optioned or sold for films, but that as yet “none of them are in any danger of being made into a movie.”

As of June 2006, Moore has been living in San Francisco, California, after a few years’ residence on the island of Kauai, Hawaii.