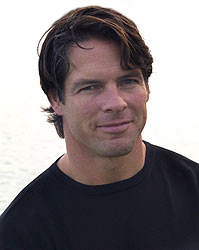 Tim Green is the New York Times bestselling author of twelve highly successful suspense novels, including his national bestseller, AMERICAN OUTRAGE, released in May of 2007, as well the non-fiction New York Times bestseller, THE DARK SIDE OF THE GAME which was featured on CBS’s 60 Minutes. His last five novels have all been national bestsellers hitting the charts at between #22 and #30 on the New York Times Bestseller list. While his first five novels used professional football as their backdrop, his most recent works have drawn more on his experiences as a lawyer exploring the themes of ambition and revenge.

Tim is also the author of a memoir entitled A MAN AND HIS MOTHER: AN ADOPTED SON’S SEARCH which was featured in People magazine, Entertainment Tonight, and ABC’s Prime Time. The movie rights to this memoir have been purchased by CBS for a movie of the week. In addition, he recently penned a deal with Harper Collins to write a series of chapter books for young readers set in the world of professional football. The first novel in this series, FOOTBALL GENIUS, was released in July of 2007.

His writing career began at Syracuse University where he was a Rossman Scholar for Humanities, a Syracuse Scholar, An NCAA Top Six Scholar, Phi Beta Kappa, and co-valedictorian of his class. While studying English Literature, Tim became acquainted with the renown minimalist, Raymond Carver, and had the opportunity to study under the award-winning writer and professor, Tobias Wolff.

During his studies, Tim also played football for the Syracuse Orangemen with a career that included a consensus All-American honors as well as his recent induction into the College Football Hall of Fame. In 1986, he was selected in the first round of the NFL draft by the Atlanta Falcons where he was a star defensive end for eight years. During his NFL career, Green began his thirteen-year career as a commentator for National Public Radio, wrote columns for USA Today, and received his law degree with honors at Syracuse University. Because of his accomplishments both Sports Illustrated and the Los Angeles Times have called Tim Green the “Renaissance Man” of sports. After his playing career, Tim spent eleven years as an NFL analyst for FOX Sports and recently hosted FOX’s nationally syndicated news magazine, A Current Affair. His other broadcast experiences have included ABC Good Morning America’s legal commentator, Court TV’s Pros and Cons, host of FOX Sports Net’s Emmy nominated show NFL TOTAL ACCESS, and Comedy Central’s Battlebots.

Despite his many endeavors, Tim makes time to coach middle school and high school kids in both football and wrestling, and to help raise money for children’s charities like the Golisano Children’s Hospital where he serves on the Advisory Board, and the Boys and Girls Club. Tim lives with his wife, Illyssa, and their five children on Skaneateles Lake in upstate New York.