John talks with Daniel H. Wilson who shares the latest happenings around his groundbreaking fiction 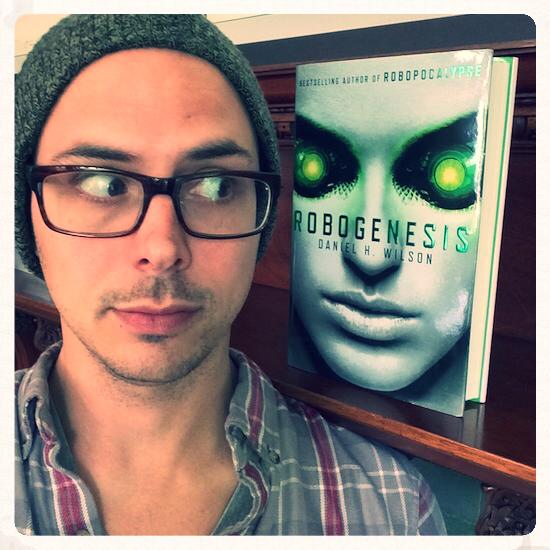 There is nothing more impressive than a beautiful day in the Pacific Northwest, and it’s a perfect time to sit down with bestselling author Daniel H. Wilson. Wilson lives in Portland, and I was able to meet him at his home to sign his latest scifi thriller, Robogenesis, and get updated on all things Daniel Wilson.

Robogenesis is the stunningly creative, epic sequel to Wilson’s blockbuster thriller and New York Times bestseller Robopocalypse. At the end of Robopocalypse, the modern world was largely devastated, humankind was pressed to the point of annihilation, and the earth was left in tatters . . . Robogenesis explores the fates of characters new and old, robotic and human, as they fight to build a new world in the wake of a devastating war.

Wilson, or Dr. Wilson is probably more appropriate, as he holds a PhD in Robotics from Carnegie Mellon University, as well as Masters degrees in Artificial Intelligence and Robotics, is one busy guy. Fresh off the road from his book tour he took time to share some of the things happening around his growing body of groundbreaking fiction.

His short story, The Executor (The Mad Scientist’s Guide to World Domination, Tor Books, 2013) is in development as a TV drama, Bro-Jitsu: The Martial Art of Sibling Smackdown (Bloomsbury Children’s, 2010) –originally optioned by Nickelodeon – is back on the table, his techno-thriller, Amped: A Novel (Doubleday, 2012) – is being discussed for big screen potential, and, last but not least, Steven Spielberg’s production of ‘Robopocalypse’ looks like it is moving forward with Thor himself, Chris Hemsworth taking the starring role, with Anne Hathaway backing him up.

In addition to penning Robogenesis, Wilson edited Robot Uprisings, an anthology with contributions from a mix of bestselling, award-winning, and up-and-coming writers, and he is currently working on a 16 issue project for DC Comics.

Just hearing him talk about all of this has worn me out, so I’m going to take a nap now – but not before diving into my personal copy of Robogenesis.