Archive for the Clive Cussler Category

John interviews Clive Cussler and Jack DuBrul about their newest (The Jungle) as well as interviews with Grant Blackwood and Kerry Frey from the Adventure Writer’s Competition.

Click to see the fun that was had in Arizona at the 2010 Cusslercon!

Author News: Phil Mercer and the Jungle with Jack DuBrul 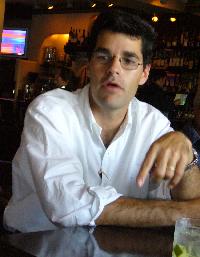 Today is the official laydown date for THE JUNGLE, so I thought I’d give Jack DuBrul a call and see how he feels about his latest collaboration with Clive Cussler. It seemed a shame to take him away from his writing, but I always enjoy talking with him.

Jack says that THE JUNGLE is probably his favorite Oregon Files book, and he sounds pleased with the twist he adds to the ending of the story.

From the “news fit to print” category, Phil Mercer lives! Jack is “hard” at work on the long awaited new Phil Mercer story. He is unwilling to share his working title, but did say that I can report that the story revolves around the global warming controversy, and starts with the long lost aviation pioneer, Amelia Earhart. As a long time fan of the series I was pleased to learn last fall that Jack would take a break from the Oregon Files to flesh out the Mercer tale that has been rattling around in his head for a couple of years.

So save a weekend sometime in the months ahead to head back to Tiny’s Bar, where you can slide onto a stool next to Harry White, order a Vodka Gimlet and wait for Phil Mercer to make an appearance.

I have it on good authority that he is on his way.

Filled with the dazzling suspense and breathtaking action that are Clive Cussler‘s trademarks, Crescent Dawn is a stunning new Dirk Pitt novel from the grand master of adventure. Crescent Dawn is the fourth collaboration between Cussler and his son Dirk, following Black Wind, Treasure of Khan, and Arctic Drift.

In A.D. 327, a Roman galley barely escapes a pirate attack with its extraordinary cargo. In 1916, a British warship mysteriously explodes in the middle of the North Sea. In the present day, a cluster of important mosques in Turkey and Egypt are wracked by explosions. Does anything tie them together? NUMA director Dirk Pitt is about to find out, as Roman artifacts discovered in Turkey and Israel unnervingly connect to the rise of a fundamentalist movement determined to restore the glory of the Ottoman Empire, and to the existence of a mysterious “manifest,” lost long ago, which if discovered again just may change the history of the world as we know it.

Cussler’s novels, using fantastic spectacles and outlandish plot devices, reflect the anything-goes quality of James Bond or Indiana Jones. Pitt himself is a larger-than-life hero who is supported by a long list of supporting characters including his side-kick (since elementary school) Al Giordino, and the cigar smoking NUMA boss, turned Vice Present, Admiral James Sandecker.

“Fans have been patiently waiting for the new Dirk Pitt novel”, says John Hutchinson at VJ Books, “. . . and they will not be disappointed. Crescent Dawn is a true tour de force.”

Clive Cussler has had more than… END_OF_DOCUMENT_TOKEN_TO_BE_REPLACED

Now in Stock – Ready to Ship!